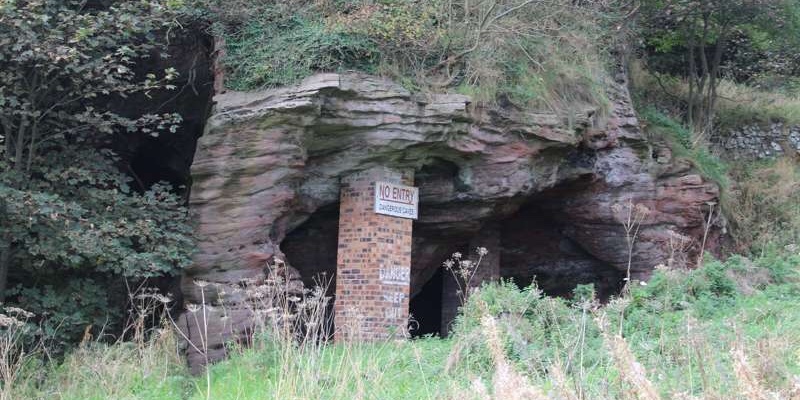 An hour’s drive north of Edinburgh, in the Kingdom of Fife, sits Wemyss (pronounced Weems), a small town on the coast of the North Sea, home to Scotland’s (and thus the world’s) largest collection of Pictish carvings. These are found in a series of caves on what on was once the shoreline, but has now been set back roughly forty feet by the deposits of the town’s industrial peak.

Picts weren’t cave dwellers (indeed, even our earliest ancestors are unlikely to have ever routinely lived in caves), but the innate allure of nature’s prefabs clearly held the same fascination for them as it has for several other cultures the world over. From the Mesolithic snail farmers of Franchthi Cave in Greece to the hand-printing specialists of Mona Island, caves attract cultures of diverse religious, cultural and historical epistemes, an observation that is proved in Wemyss itself, as pagan Pictish carvings brush against their Christianised descendants and the vandalism of more recent times (Victorian signatures abound).

Unfortunately, this vandalism is not a thing of the past. Budweiser bottles and fagends were secular relics of the most recent of the caves’ guests, and while for the dedicated team of the Save Wemyss Ancient Caves Society the maintenance of these sites is clearly a labour of love, it is equally clear that not everyone has the same reverence for them. Little wonder really – despite their archaeological and artistic importance and the sheer fun of climbing through caves against a panorama of the Firth of Forth, I would have lived in ignorance of these caves myself had I not scoured Eventbrite for more esoteric weekend ideas. Interesting to bear in mind when we deride other countries for failing to maintain their historical sites perhaps.

But enough politics. What of the carvings? Well, the first thing to say is that visiting is paramount. Not only do pictures fail to do justice to the texture of wall-carvings, but seeing them in person can dispel some assumptions that reading alone can engender. For example, ‘cave’ written down almost certainly evokes a dingy and dark atmosphere in your mind’s eye, but as our guide informed us, while they are dark (though very well-ventilated) today, this certainly wouldn’t have the case in Pictish times (c. 3rd century AD – 950), with the carvings even arranged to take advantage of the natural light. It is also true that some of carvings seem to replicate features of their environment: in the Court Cave, for instance, one seems a reasonably accurate rendition of the cave’s own entrance.

The second point to make is that the carvings, and the general Pictish use of the site, appears to be quite early. I am no expert on the Picts, but I’ve picked up a thing here or there, and the Ogham script that they eventually came to use is in little evidence here (a possible single instance in Jonathan’s Cave is mentioned in the guidebook but I was not able to verify this either way). Other motifs of Pictish art, such as fish imagery, also seem to appear here before they had taken their characteristic form, while potential cup and ring design in the East Wemyss Passage points at an even earlier Neolithic use of the caves. And, of course, the stand-out image of the entire cave complex is that of the presumed oldest image of boat in Scotland, although this is interpreted as related to the time of the relatively late Pictish conversion to Christianity. I wonder, again citing my lack of historical knowledge on the subject, if there is some significance to this early use of cave sites, and if the later Christianised Picts coming back bore some relationship to this. Answers on a postcard please.

My final observation would be simply to celebrate the sheer complexity of wall-carvings in their manifold iterations. I am not going to lie, I had ulterior motives for coming here: while I am no scholar of the Picts, the northern Black Sea is not lacking in caves of its own, and the peculiar signs of the nomadic peoples of the Pontic Steppe in the early centuries AD, termed ‘tamgas’, have become something of an obsession for me lately. Here was an opportunity to live my Sarmatian life vicariously through Pictish art (like some modern day Declaration of Arbroath!). And while I was by no means disappointed by my trip to the caves of the Kingdom of Fife, it was immediately apparent that, notwithstanding superficial similarities, the walls here were talking in a wholly different visual language. While many of the same questions concerning the meaning, function and dating of these signs was shared with tamgas (with many of the same answers given, it must be said), visiting sites in-person as thankfully we are once again able to do enables us to see past the temptingly neat but obscuring generalities and appreciate the complexities of each culture, context and individual artefact. I would thus highly recommend a trip to these caves of your own to figure your own meaning and responses to these carvings – you won’t regret the drive!

One thought on “Puttin’ on the Picts: A Trip to Wemyss Caves”

© whoyayaya, 2016. Unauthorized use and/or duplication of original material published on this site without express and written permission from this site’s author and/or owner is strictly prohibited.